For the laser which is completely turned off, the carrier lifetime will limit the modulation rate. For a current pulse Ip , a period of time td given by:

is needed to achieve the population inversion to produce a gain. IB and Ith are the bias and threshold currents, and T the average lifetime of the carriers. From this formula could be inferred that the time delay can be eliminated by biasing the diode at the lasing threshold current.

We will demonstrate this dependence in Figure 1.

Discussion of the numerical parameters: bit rate is 1 Gb/s and sequence length 8 bits, therefore, the time window is 8 ns. Samples per bit are 512, therefore, the sample rate is about 500 GHz. The default resolution therefore is about 120 MHz.

In Figure 2, the initial electrical pulse is shown. 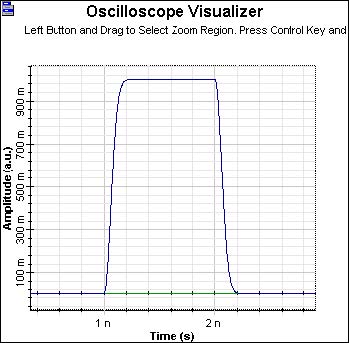 The adiabatic chirp can be observed when the “off” state level is nonzero and it is dominant at low frequencies.

For the case of 1 Gb/s (modulation peak power current I = 50mA), we will
demonstrate the appearance of the adiabatic chirp as a function from the IB. In the
next two figures, we will see the amplitude and phase modulation (chirps) for the case
of IB = 30 and 40mA, respectively.

It is clear to see the nonzero off state in the second case and correspondingly, the appearance of the adiabatic chirp.

With Figure 5, we will demonstrate the disappearance of the adiabatic chirp for larger frequencies, – 5 Gb/s transmission, keeping all other parameters the same. 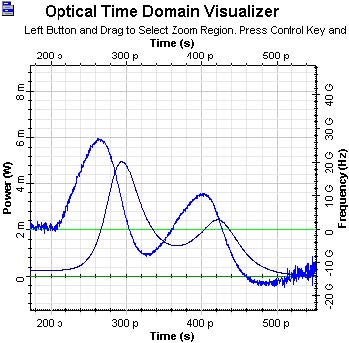 The transient chirp is associated with the time rate of change of the optical power. The rate of the change is greatest at the leading edge of the pulse when the bias current is below the threshold current.

In the next two figures the amplitude fluctuations and the corresponding transient chirps will be compared for the case of 1 Cb/s transmission with IB = 20 and 40mA. In the first case, much greater transient chirp is expected.

Qualitatively different behavior of both amplitude and phase modulations can be seen. Note the much larger transient chirp in the first figure.

The large-signal characteristics of directly modulated semiconductor lasers were demonstrated. The delay time required to achieve the population inversion to produce the gain and typical amplitude and phase modulations were shown.