In this tutorial we show an example of a maximization procedure. We will optimize the launch power and DCF length to maximize the Q factor at the receiver.

Upgrading an existing noise-limited fiber plant requires an increase in launched power, which in turn brings the fiber nonlinearities. It has been shown that nonlinear return to zero (RZ) coding offers significant advantages for high bit rate transmission systems [1][2]. Because the fiber dispersion and Kerr nonlinearities balance each other in this case, the launched power is not limited by self phase modulation (SPM). But this configuration requires careful selection of launch power and dispersion compensating fiber (DCF) length.

Parameters for the optimization tool are as follows: Initial laser power and DCF length are set to 20 dBm and 20 km respectively. Lower and upper bounds of power are defined as 15 dBm and 25 dBm, 0 and 30 km for DCF length. The termination tolerance of the parameter is 1, that of the result is 0.1. 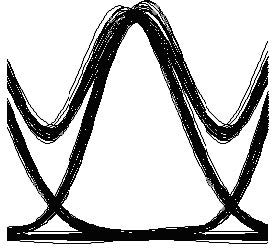 Maximum Q Factor for back-to-back propagation was about 68. This shows that the optimum dispersion compensation corresponds to about 45 km of compensated SMF (~963 ps/nm residual dispersion) with ~20 dBm launch (~16 dBm average) power. We also found that the power penalty at 10-9 BER is 0 dB for optimum values (Required received power to get 10-9 BER is around -17 dBm, which is same as the receiver sensitivity). Figure 2 shows the eye diagram after 100 km of propagation with optimum parameters. 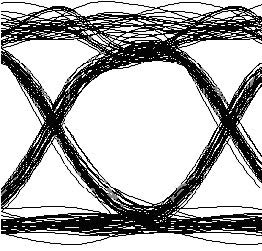 We have performed similar optimizations for NRZ modulations. The receiver sensitivity is -15.6 dBm. Maximum Q is obtained after 4 calculations when laser power is ~19 dBm (~16 dBm average power), and DCF length is ~18 km. At the optimum point, Maximum Q Factor is ~10 and received average power is -12.3 dBm.

We have found that the power penalty at 10-9 BER is ~1 dB for the optimum values when NRZ is used. Optimum dispersion compensation corresponds to about 80 km of compensated SMF (~355 ps/nm residual dispersion).

Figure 3 shows the eye diagram after 100 km of propagation with optimum parameters when NRZ modulation format is used. The obtained results agree well with the experimental findings of [3] and [4]. Furthermore, comparing the Q factors at optimum points shows that, in fact RZ modulation can tolerate more distortion and reach longer transmission distance.