The objective of this lesson is to demonstrate the possibility of simulating a packet- interleaved operation using OptiSystem.

In this case, the data stream externally modulates a periodic stream of narrow pulses.

Because the bit interval is T, the separation between successive pulses is also T.

In this way, we have to reduce the interval between successive pulses to T2, a high- rate multiplexed signal. This is done by passing the initial sequence through a series of compression stages.

If the size of each packet is L bits, the output goes through K compression stages

We have designed a compression stage with OptiSystem. See Figure 1.

The stage was implemented in a subsystem because each compression stage has the same layout.

The only difference between the compression stages were some parameters such as Bit rate at the PRBS Generator and the Delay at the Time Delay component. However, these parameters were set in script mode to allow the reuse of the subsystem.

To demonstrate the packet interleaving, we have created a sample in which packets with 6 bits length are created.

The system in Figure 2 shows the layout with three compression stages.

The initial sequence modulated was 10110100 and the behavior of the optical signal along the transmission can be seen in Figure 3. 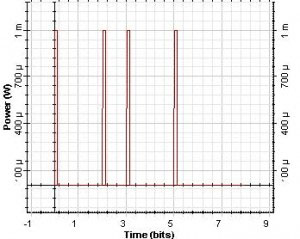 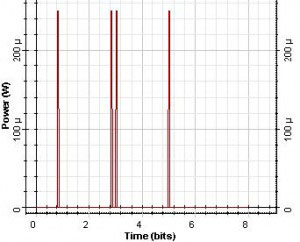 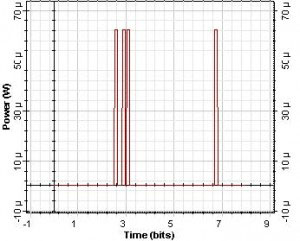 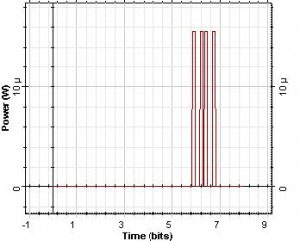 Another system was created, but this new one has 16 bits/packet and the initial sequence was pseudo-random.

Figure 4 shows the system layout for this case. Because the packet has 16 bits, the number of compression stages must be 4.

With an initial sequence of 32 bits, the formation of 2 packets can be seen in Figure 5. 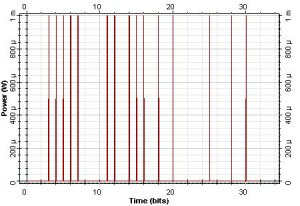 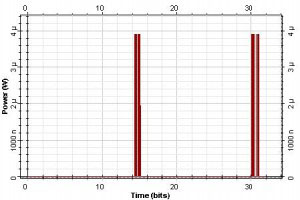 Figure 5: (a) Input signal and (b) the two packets at output