The objective of this lesson is to demonstrate the ability to modulate optical signals in formats different of the common RZ and NRZ.

In this tutorial our goal is to generate a 40 Gb/s optical signal in the proposed modulation formats:

Furthermore, we have used a duobinary precoder for the duobinary and MDRZ signals in order to avoid recursive decoding in the receiver.

The Duobinary was generated by first creating an NRZ doubinary signal using a precoder and a duobinary pulse generator. The generator drives the first MZM, and then concatenates this modulator with an second modulator that is driven by a sinusoidal electrical signal with the frequency of 40 GHz.

The duobinary precoder used here was composed of an exclusive-or gate with a delayed feedback path. 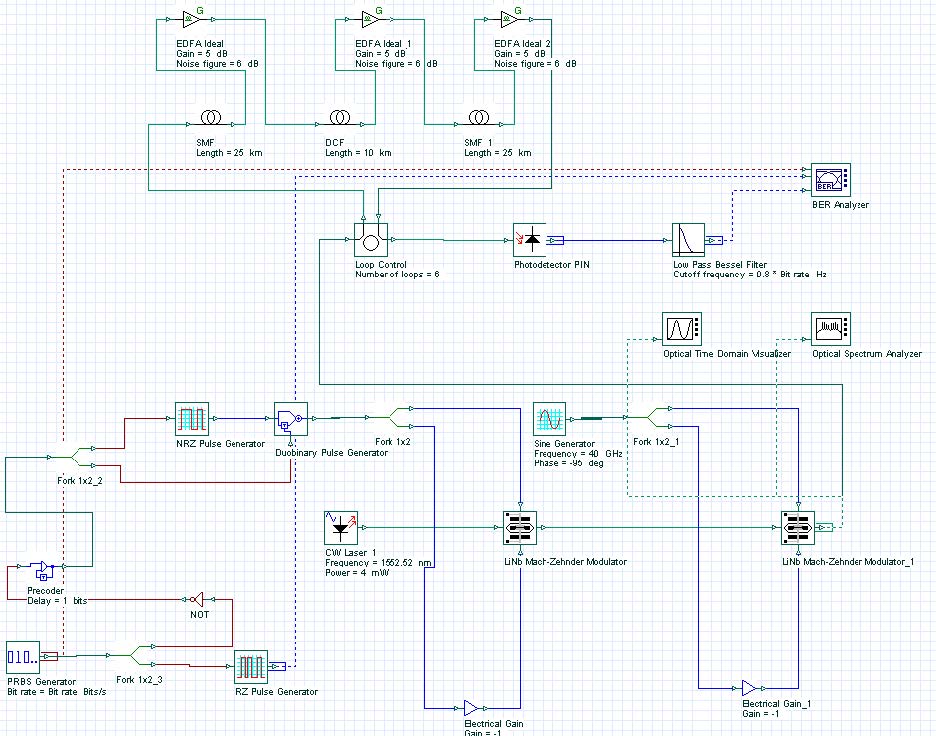 The optical signal at the output of the second MZ modulator is shown in Figure 2. 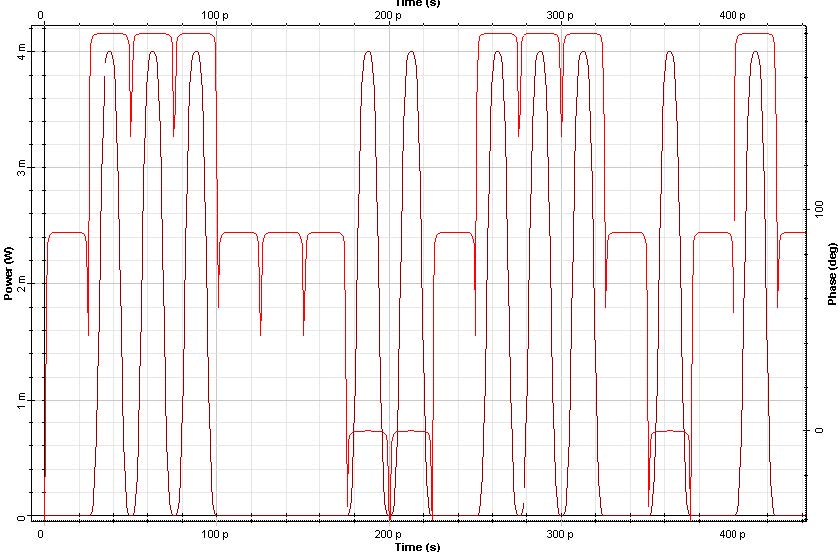 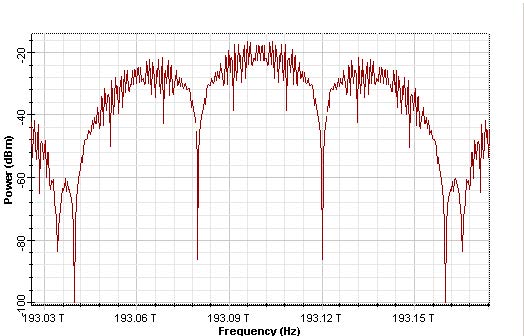 The CSRZ signal is generated in a similar way to the RZ format. However, the frequency of the sinusoidal electrical signal applied in the second MZM has half of the bit rate, 20 GHz.

The second MZM was biased in a way to provide alternating optical phases between 0 to π for the neighboring time slots. 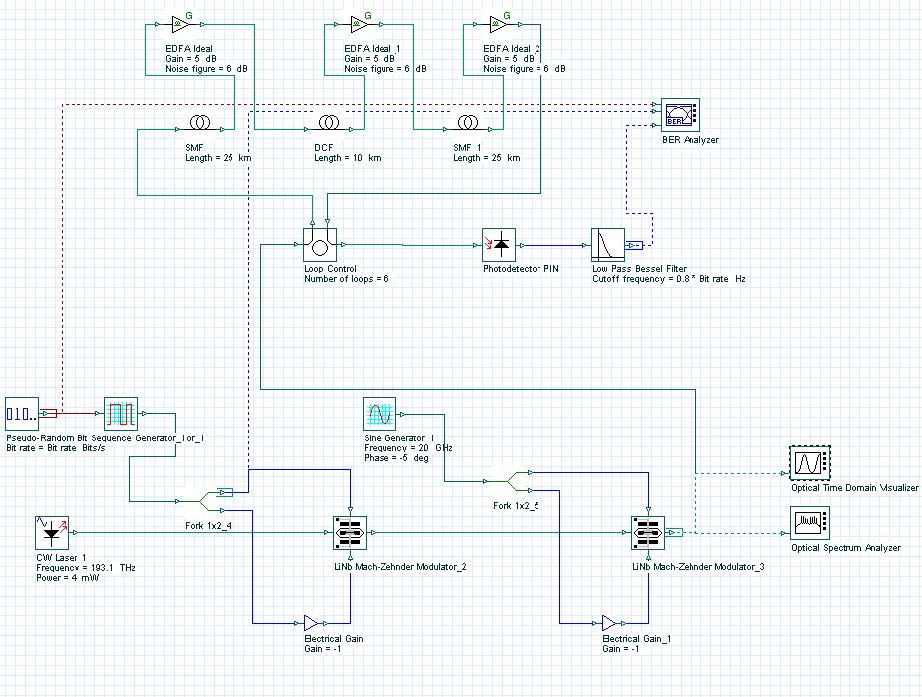 The CS-RZ optical signal is shown in Figure 4.

We can see in Figure 4(a) that the phase of bits ‘1’s are alternating with a difference of π (180o). This phase difference causes the elimination of the carrier at 193.1THz. 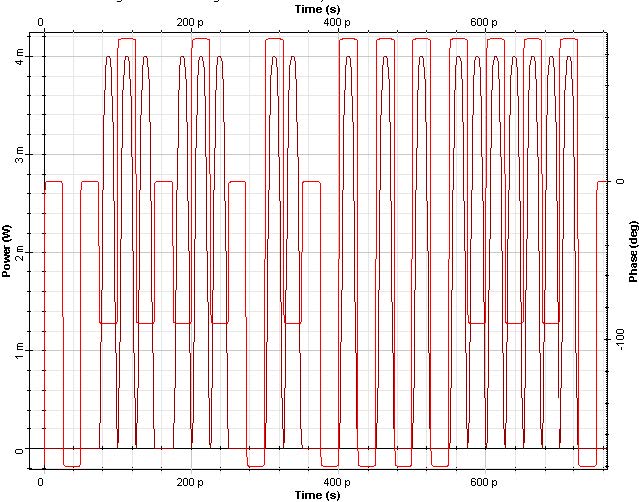 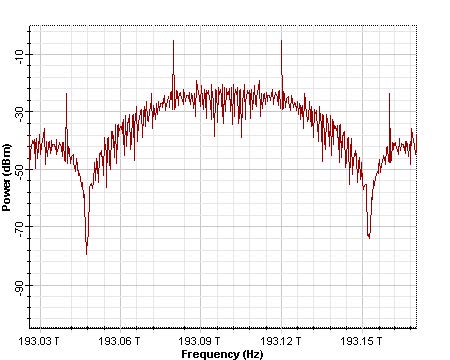 Figure 4: CSRZ signal (a) Time domain, and (b) spectra

The MDRZ was generated by first creating an NRZ doubinary signal using an delay-and-subtract circuit that drives the first MZM [1], and then concatenating this modulator with a second modulator that is driven by a sinusoidal electrical signal with the frequency of 40 GHz.

The duobinary precoder used here was composed of an exclusive-or gate with a delayed feedback path. 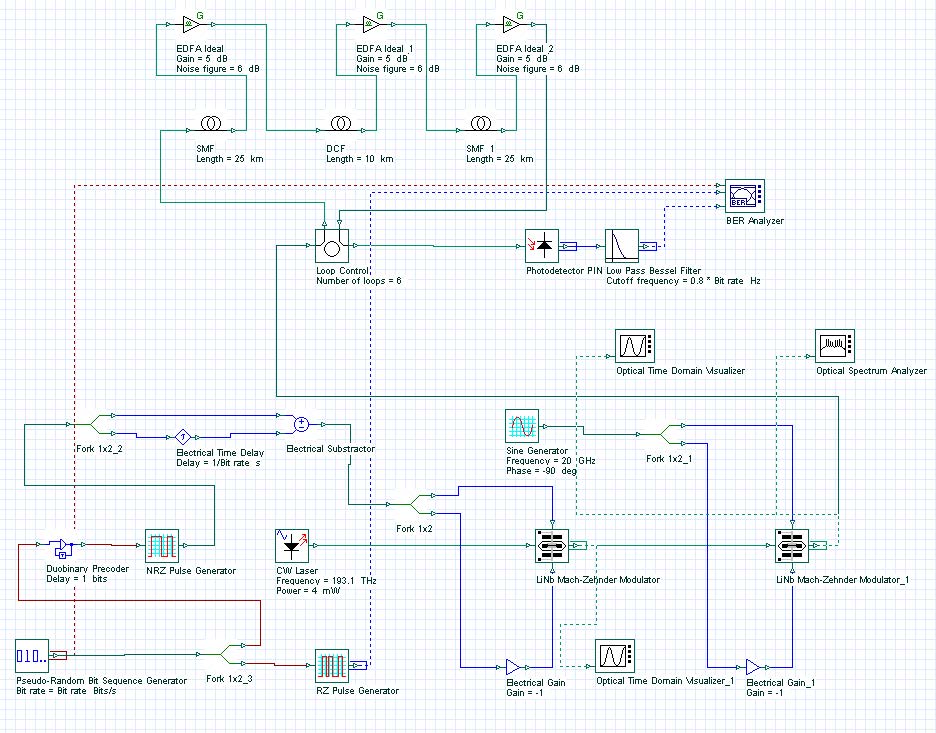 The MDRZ signal is shown in Figure 6.

This will cause the difference in the signal spectra shown at Figure 6(b). 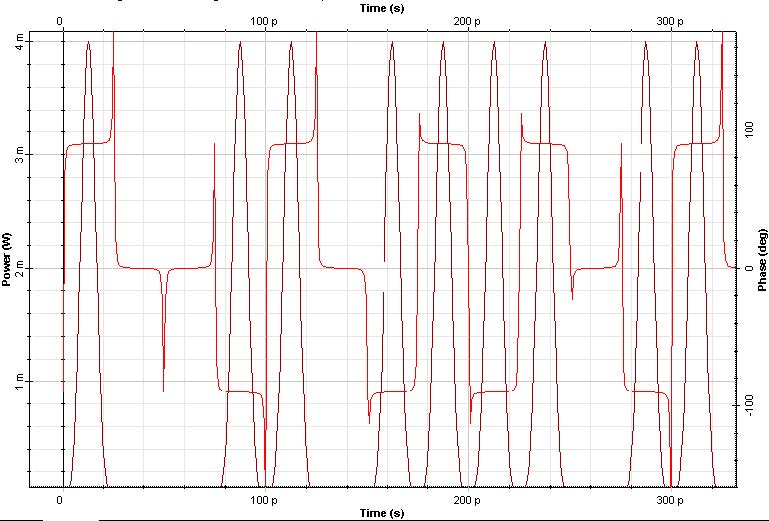 For the DPSK signal generation, we continue to use two concatenated modulators.

The phase modulation was generated by first encoding the NRZ signal using a duobinary precoder that drives the first MZM and modulates the phase of the CW signal, and then concatenating this modulator with an second modulator driven by a sinusoidal electrical signal with the frequency of 20 GHz.

The encoding in the initial bit sequence will allow the demodulation of the transmitted signal at the receiver by using a Mach-Zehnder interferometer and balanced photodiodes.

Figure 7 shows a system transmitting a DPSK RZ with 33% of duty-ratio signal at 40 Gb/s (sample DPSK_33%_Signal.osd). 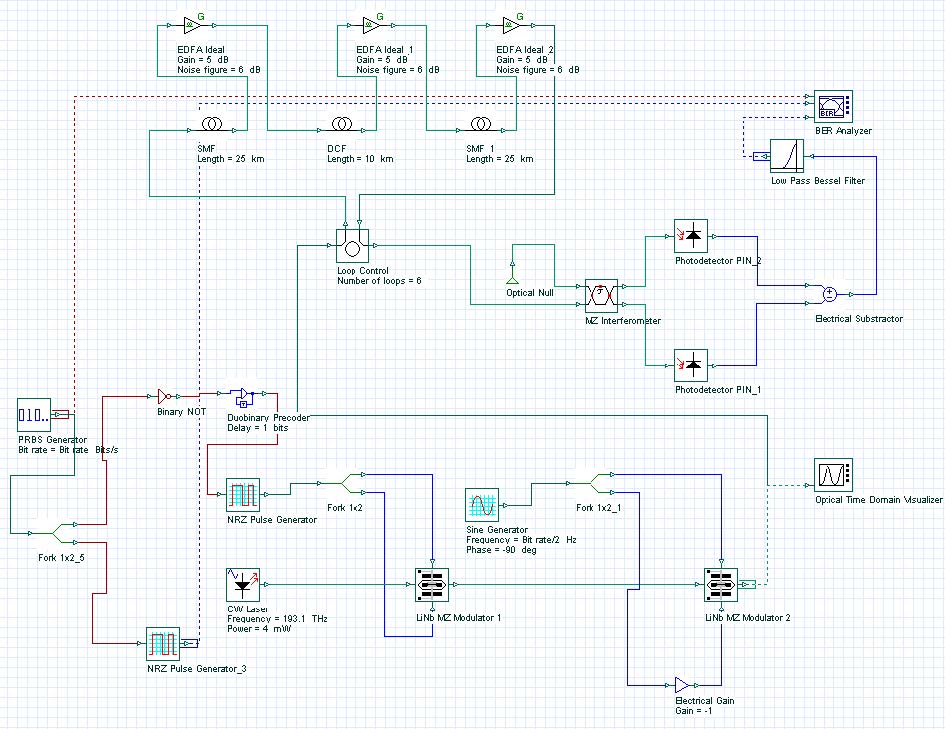 The DPSK signal is shown in Figure. 8.

The corresponding signal spectrum is shown at Figure 8(b). 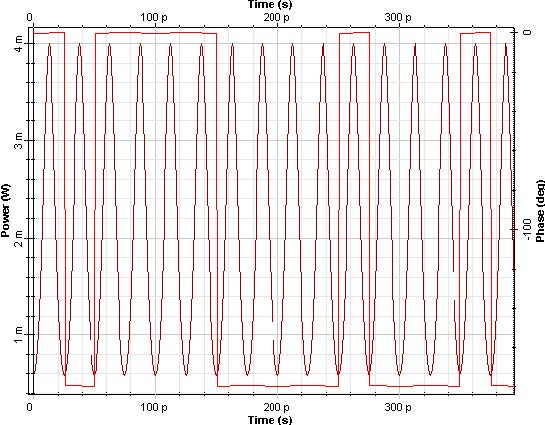 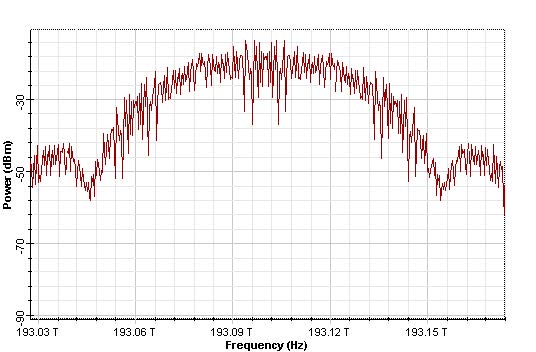 The generation of a DPSK signal with 66% of RZ duty-ratio is very similar to the system in the last layout. Only the phase and amplitude in sinusoidal electrical signal and the bias voltage in the second MZM are modified to generate the RZ signal with 66% of the duty-ratio.

The new layout can be seen in Figure 9 (sample DPSK_33%_Signal.osd). 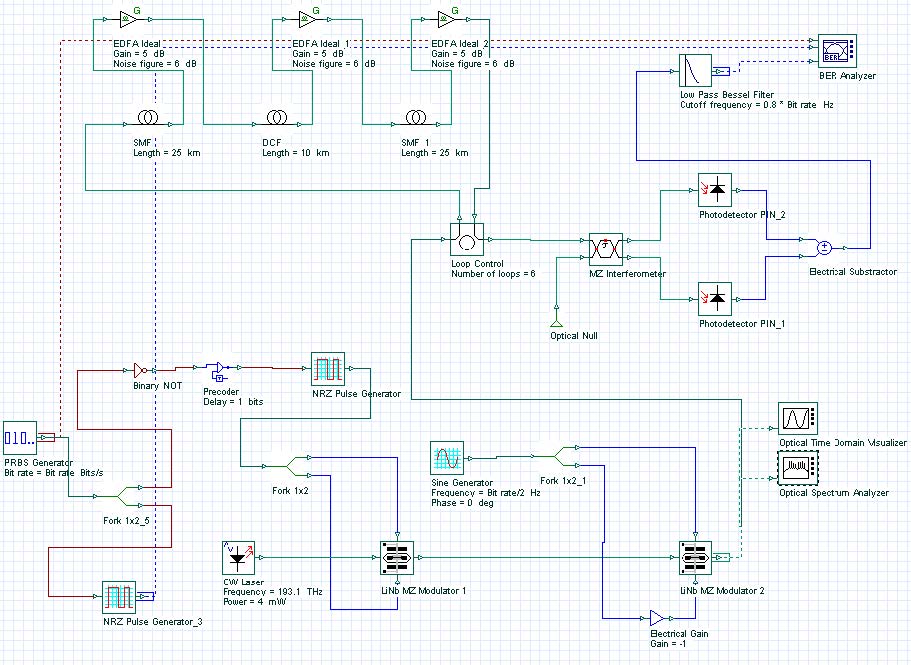 The DPSK signal is shown in Figure. 10.

We can verify a sequence of bits ‘1’ with the information modulated in its phase.

The correspondent signal spectrum is shown at Figure 10(b). 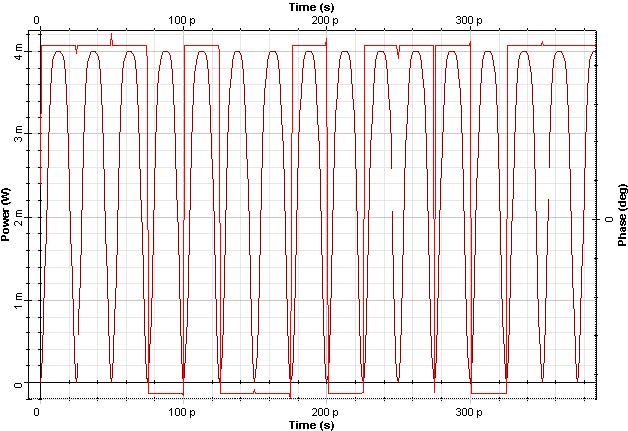 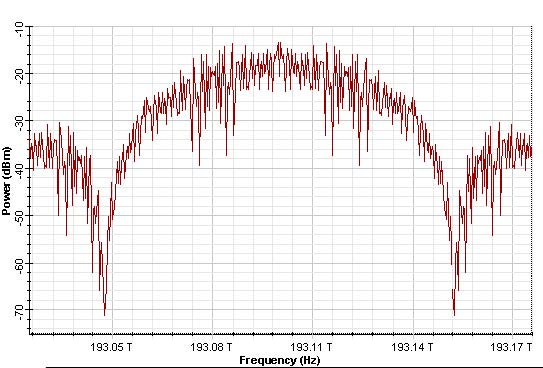 However, to do that, the information has to be encoded in way to allow the demodulation in the reception using two set of interferometers and balanced receivers.

The codification in the initial information was done using the DPSK component (precoder) that will simulate a precoder and generate two encoded signals that will modulate the first and second MZ modulator.

The last modulator will generate the RZ signal. 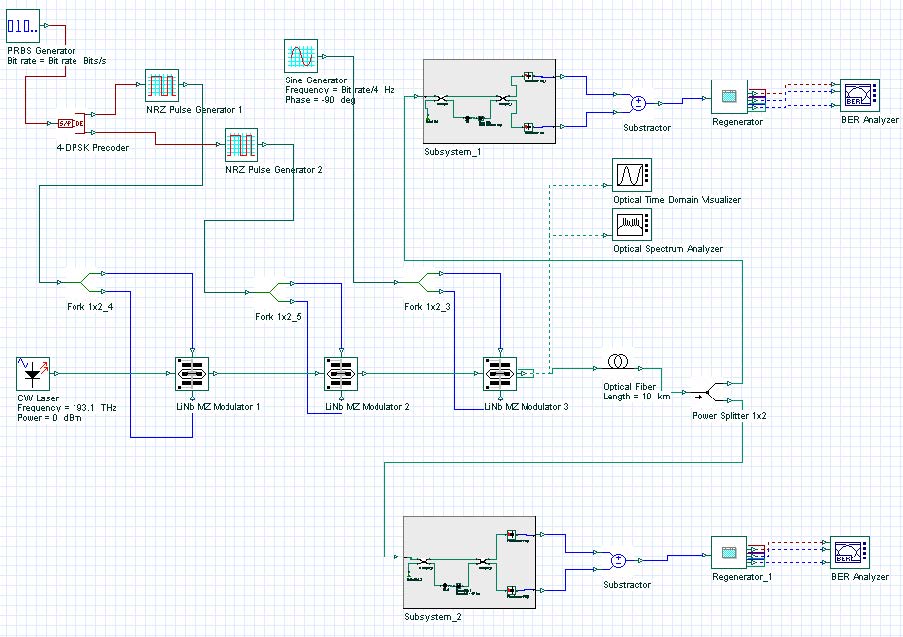 Each transmitted symbol conveys two bits, encoded in four possible phase differences between successive symbols as can be seen in Figure 12(a). 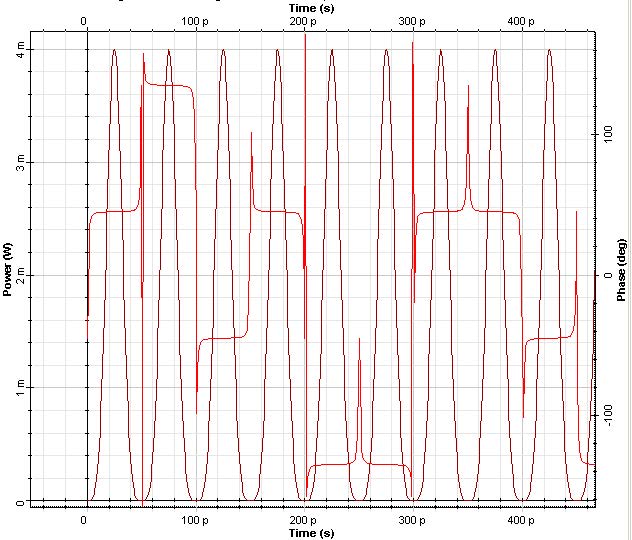 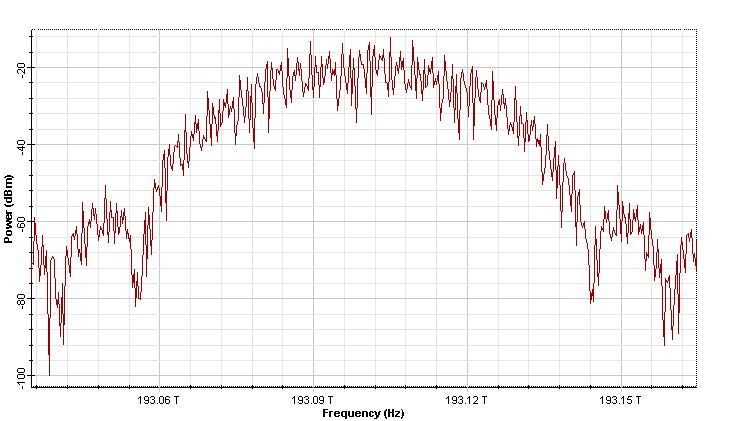 Figure 12: DQPSK signal (a) Time domain, and (b) spectrum