SOA as a Wavelength Converter (FWM)

This lesson demonstrates the application of traveling wave SOA as a wavelength converter using the four-wave mixing effect.

Four-wave mixing (FWM) is a nonlinear effect that takes place when two waves (signal and pump) at different wavelengths are injected into an SOA. A third optical field is generated at the device output, with frequency Wc = 2Wp – Ws = Wp – Ω , where Wp and Ws are the frequencies of the pump and signal field respectively, and Ω = Ws – Wp is detuning between signal and pump.

Several physical phenomena can generate FWM in SOA. When detuning at the order of several GHz, the main mechanism is the carrier density pulsation induced by the signal-pump beating. The carrier density pulsation appears because of the stimulated emission. Our SOA component can handle generation mechanism of FWM. For higher values of detuning, carrier pulsation is no longer effective, and FWM is created from two fast intraband relaxation processes:

As their characteristic times are of the order of hundreds of femtoseconds, they become important for values of detuning greater than 1THz [2] and [3].

The main advantage of frequency conversion based on FWM is independence of the modulation format and the bit rate. An additional advantage of this technique is the inversion of the signal spectrum and the resulting reversal of the frequency chirp. This property can be used to achieve dispersion compensation. The main disadvantage of the FWM converter is its low conversion efficiency [2] and [3].

To realize this idea, two CW signals are multiplexed and then launched into SOA, as shown in Figure 1. 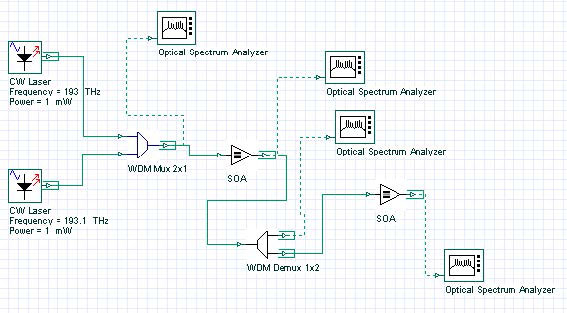 Using this project, we will demonstrate the principle of carrier density pulsation induced FWM in SOA. To demonstrate this, two CW signals with carrier frequencies 193 and 193.1 THz and the power of 1 mW (without line widths, initial phases, and polarizations) are multiplexed with the help of WDM Mux 2×1 and launched in SOA. Figure 2, Figure 3, and Figure 4 show the WDM and SOA parameters. 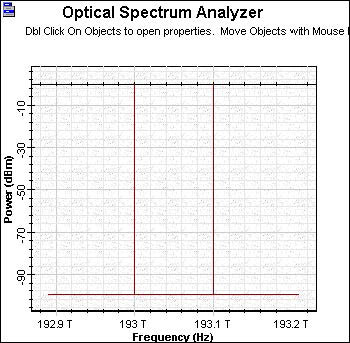 Figure 6 shows the signal power after the first SOA. 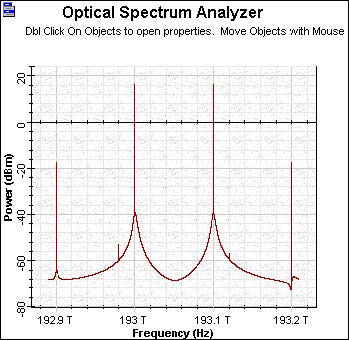 Figure 8 shows the spectrum in the channel at 193.1 THz after demultiplexing. 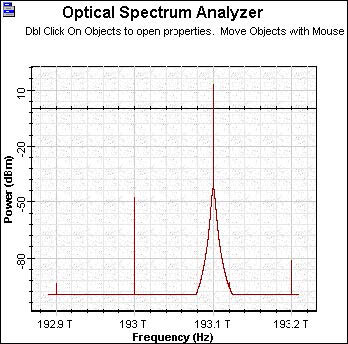 To obtain a better signal from the FWM at 193.2 THz after demultiplexing, we amplify the signal with the second SOA with the same properties as the first one. Figure 9 shows the resulting spectrum. 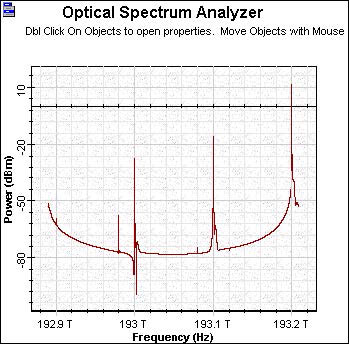 Figure 9: Improved signal from the FWM at 193.2 THz after demultiplexing

This lesson demonstrated the principal possibility of application of traveling wave SOA as a wavelength converter using four-wave mixing.