Scattering data is a new simulation feature in OptiBPM. OptiBPM uses scattering data when a small part of a larger photonic circuit is isolated for characterization using BPM. This smaller part has waveguides entering on the left side and exiting on the right side. The N inputs and the M outputs are assumed to have light in a modal configuration, although the input and output waveguides may be tilted.

You can export the scattering data matrix that OptiBPM produces to OptiSystem for future analysis.

This lesson describes how to generate and export scattering data and the connection between OptiBPM and OptiSystem simulators on a simple 2D directional coupler. There are two sections:

Before you start this lesson

We will analyze one of basic photonic circuits, the Mach-Zehnder Interferometer (MZI) shown in Figure 1 . The device actually consists of four basic components/devices and our goal is to divide the circuit into these primitive self-existing devices, or, in other words, the 3dB coupler. They can be separately simulated by means of OptiBPM and later analyzed as the entire device by OptiSystem.The device can be quite large, and therefore, consume an extended simulation time. Any division to a subcomponent decreases the time consumption drastically, because the simulation speed is proportional to the area of the component (see Scattering Data in the Technical Background for more information). At this point, we should emphasise the circuit division criteria are case sensitive and the decision is dependent on the user’s knowledge and experience, however the subcomponents (i.e. their boundaries ) are often visible naturally. On the other hand, an improper subcomponental division can cause false results. Moreover, the designer has already the principle of a given circuit operation clearly in mind prior to enitiating any practical design. In this example, we will design the MZI to have a maximum intensity for one wavelength and the minimum intensity (in the same port) for another wavelength. This is the principal behaviour of the MZI and it can be exploited as a basic switch, because the other output port obviously behaves in a complementary fashion to the first one.

The functionality of the device is well known. The light is launched into one input (we will select the upper input waveguide, marked ‘input’). The input 3dB coupler splits the light into two equal parts. The 3dB coupler was previously optimised to split the light equally from one input port to the output ones. The light then propagates independently through each arm. One of them is optically longer, what causes a phase difference at the ends of these arms. This can be achieved in several ways, we simply demonstrate this effect by increasing the core refractive index of the lower arm. Finally, the light coming from both arms enters the output coupler, which recombines the light depending on a magnitude of the phase difference. If there was no phase difference, the light should ideally appear just in the lower (‘B’) ouput port. However, with the presence of a certain phase difference, the light distribution will vary with changing wavelength. We will omit any theory here for the sake of brevity (you should refer to any basic photonic literature, such as [1]). Since we are interested of the wavelength dependence on the device bahaviour, the optical phase difference takes the form:

where λ is the wavelength, L is the arms length, n, (λ) and  n2, (λ) are the effective indices of the upper and lower arm, respectively. The length of the arms in between the couplers is 3 mm. Regarding the material configurations, the core refractive index is 1.5, the cladding is 1.49 for all devices. The core refractive index of the lower arm is increased to the value 1.52. The width of all particular waveguides is 4 microns. A basic inspection of the effective indices shows, we should thus be interested to analyze the wavelength interval from1.534 nm to 1.554 nm to reach desired behaviour of the device (including couplers).

Obviously, we can see the following subcomponents in our case (see Figure 1):

One (the lower) of the arms causes the desired phase difference Φ.

To start designing the 3dB coupler, we will use the coupler created in Lesson 6, where the influence of the distance between the coupling parts of the coupler was studied by a script (see Figure 2). When you run the sample file, you can see the the optimal half splitting power appearing somewhere between the 3rd and 4th iteration step (see Figure 3). 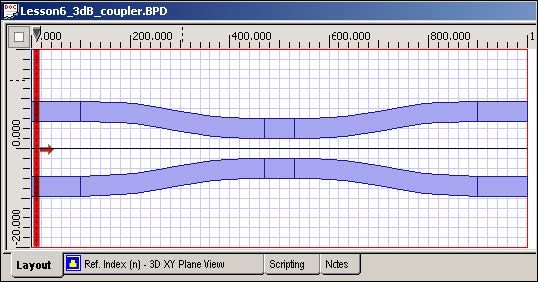 To use the data in Lesson 6 to generate scattering data, perform the following procedure.

It is obvious the vertical positions of the all SBends and the short central linear waveguides (Linear6 and Linear3) have to be defined accordingly. Considering the ideal coupling for x = 3.5 , the expressions from the script yield for the desired vertical positions the value 3.278 and -3.278, respectively. However, let us consider a slightly non-symmetric coupling (approximately 45% and 55% of the total power to each waveguide) as a fictitious simulation of an inaccurate fabrication. We will decrease the values slightly, to +/- 3.19. The easiest way to modify these vertical waveguides is to simply modify manually the pertinent waveguide coordinates. The coupler is saved as deriv_3dB.bpd for further exploitation.

To modify the waveguide properties for this lesson, perform the following procedure.

The ends of the S-bend waveguides must also be modified to meet the ends of Linear3 and Linear6.

To generate the scattering data script, perform the following procedure.

Note: The default number of steps is 3. When you select only one step, the results are wavelength-independent for further analysis. 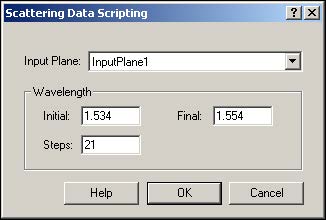 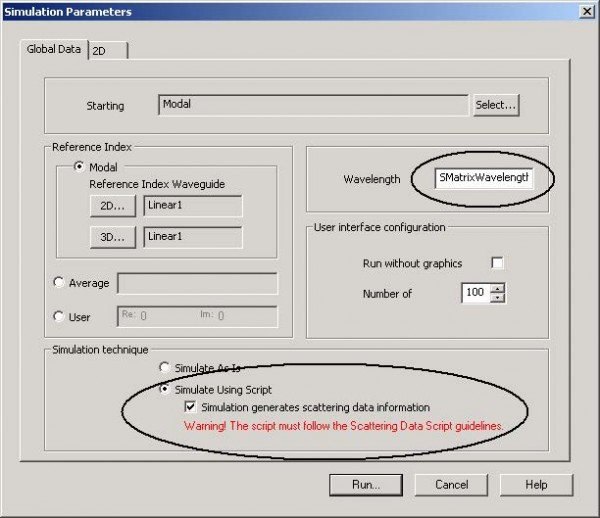 There are two possibilities for the S-data export:

Obviously, both are mathematically equal. However, the polar coordinates export is advantageous for relatively longer devices, because of further interpolation of slowly varying cumulative phase in OptiSystem. Therefore, only a few iteration steps are required. On the other hand, the Cartesian coordinates export is worth using in cases of sudden phase changes in the device behaviour, but quite a number of iterations is needed (i.e., frequently oscillating function is to be fitted in most cases).

To export the scattering data from OptiBPM_Analyzer to OptiSystem, perform the following procedure. 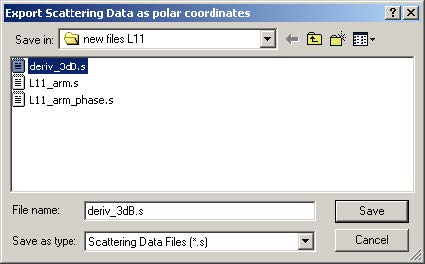 The layout consists of the straight linear waveguide. Use the following parameters:

Note: Since we are dealing with the single straight waveguide, 14 or less steps should be accurate enough for the data export.

Figure 11: The layout of the arms of MZI

This section describes how to analyze the scattering data *.s file generated from OptiBPM in OptiSystem. The procedures are:

To load the *.s file into the OptiBPM Component NxM in OptiSystem, perform the following procedure. 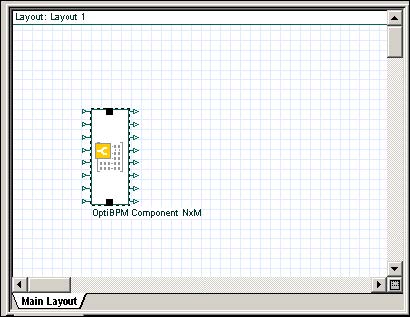 You must select the type of data (Cartesian (Real Imag) or Polar coordinates (Amplitude Phase). The choice must correspond to the data style exported from OptiBPM (Polar in this case). 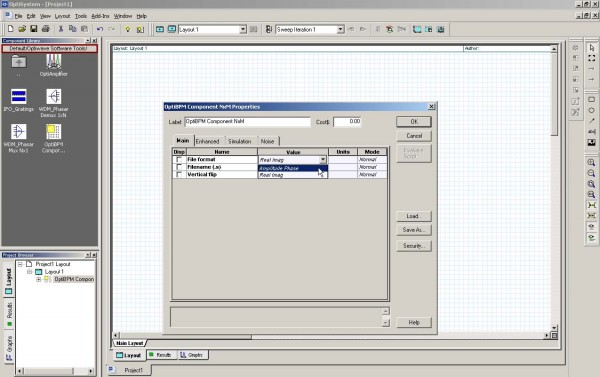 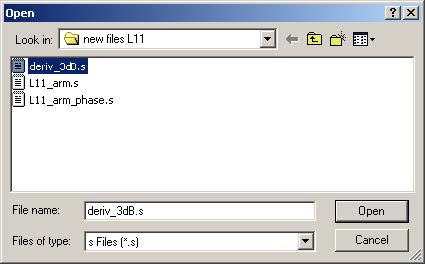 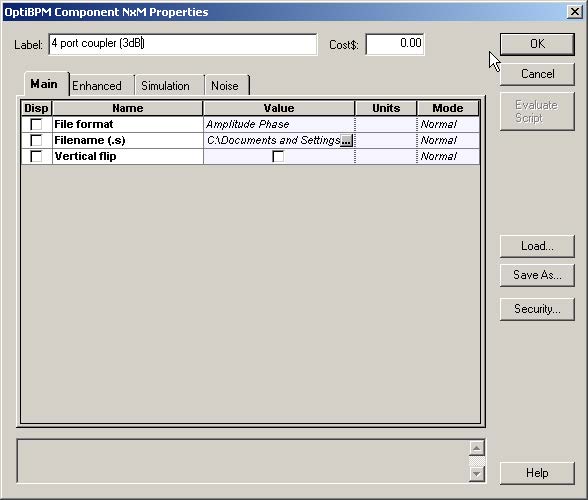 To load the arm files, perform the following procedure.

Note: There are options available in OptiSystem that save time when loading/copying files into layouts. Moreover, Optisystem keeps recently used files under the identically called folder. You can simply open the folder and drag the OptiBPM component, if recently used. 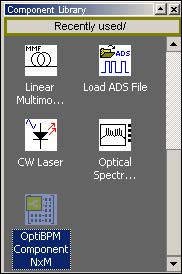 Having introduced the input coupler and the both arms, the OptiSystem layout should look like Figure 19. 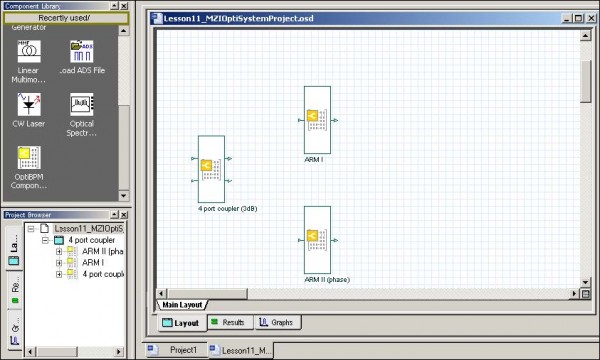 Completing the layout in OptiSystem

To finish the layout, simply copy and paste the input coupler and move to the right (the *.s file has already been loaded as previously described). Arrange (clicking and moving) the icons to follow the schematics from Figure 1 approximately (see Figure 20). 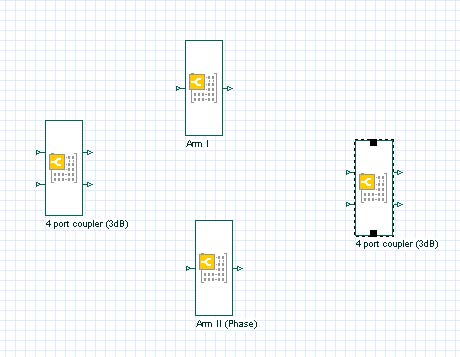 To add light power to the inputs and detectors of the OptiBPM Component NxM outputs, perform the following procedure.

Note: Because we are studying wavelength response, we will use the Optical Filter Analyzer, which mutually transmits and receives the light from a given interval. The component extracts the frequency response of an optical component by comparing a reference optical signal before and after the calculation. 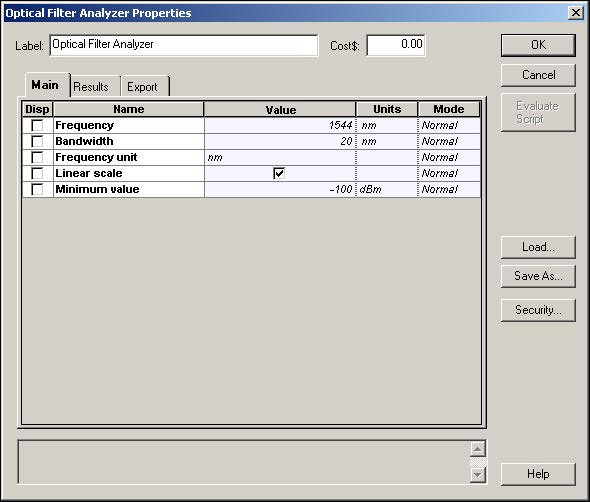 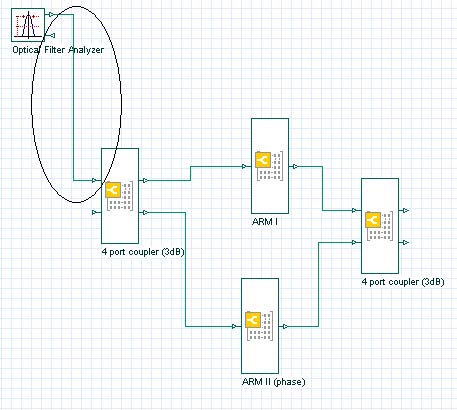 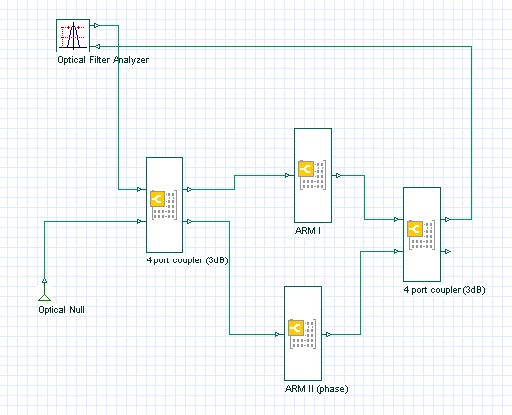 To run the calculation, perform the following procedure.

Creating the graph to view the results

When the simulation is complete, to create graphs to view the results, perform the following procedure. 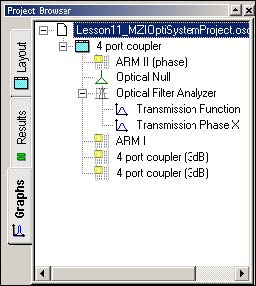 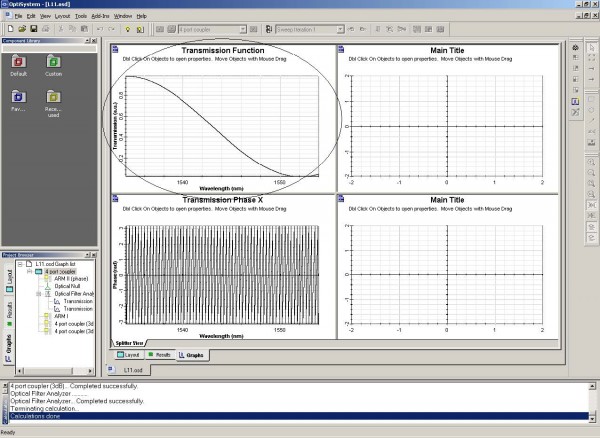 The power response can be seen in the upper graph. As expected, the power decreases from the maximum (relative units normalized to ‘one’ as for maximum) value to no power at the other end of wavelength spectra.

The lower graph depicts the optical phase as the function of the increasing wavelength within the mentioned interval.