Narrow angle far-field transform being used in OptiFDTD is based on the Fraunhofer
approximation:

Associated with the angle where to observe the far-field, far-field formula now can be
simplified as

Please note that the above formula assumes that the far-field plane is far away from
the near field one. OptiFDTD uses Equation 72 to calculate the narrow angle far field
transform. 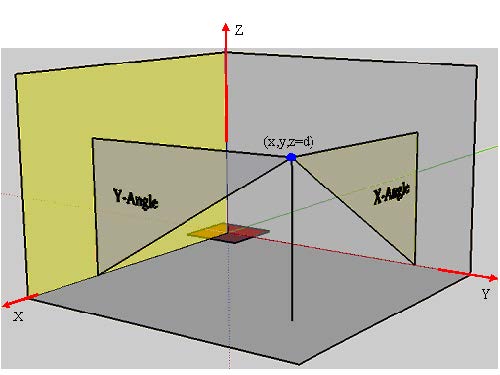 Wide angle far field transform is based on the Fresnel-Kirchhoff diffraction formula [1].

Where R is the vector from near-field to far-field.

It is known that the real electromagnetic power transmitted through the closed surface
S into the volume V is equal to the power loss produced by conduction current
resulting in Joule heating plus the power loss resulting from polarization damping
forces.

From the complex Poynting vector theorem, the time-average heating absorption
intensity is expressed as

where σ is the conductivity that may be varied with wavelength, E is the electrical field
components.

In OptiFDTD, for each cell in a given observation area, the heating absorption
intensity for each polarization then can be expressed as

where the subscript letter, x,y and z means the polarization direction, i and j is the
position index.

So the permittivity and conductivity is

The conductivity can be delivered as