Plasmonic nano-hole arrays are an interesting avenue of research because of their highly sensitive transmission properties. Incorporating the already strong light-matter interaction of surface plasmons into a periodic structure allows an even greater control over the resonant peaks of the transmission spectra. Like any periodic structure the physical device can be studied effectively by limiting the scope to a single unit cell. Using OptiFDTD, the spectral response of such structures can be investigated in great detail.

The extraordinary transmission properties of a rectangular air hole plasmonic array was investigated by simulating the unit cell of the periodic structure. Using periodic boundary conditions (PBCs) the simulation domain can be reduced many times its original size, as seen in figure 1. When the input signal is set to a Gaussian Modulated Continuous Wave (GMCW) mode, the finite difference time domain (FDTD) method allows the spectral response to be calculated from one simulation.

Optical designers are interested in the behaviour of a device with respect to one or two parameters, these parameters may control the geometry or material properties in complex ways, which can make manually changing the design file tedious. In these cases, the user is given the option to script the layout. For example, in the current application the orientation angle of air hole φ and the unequal scaling factor θ. The unequal scaling factor relates the lengths of the sides, so a square would have a φ of 45°. 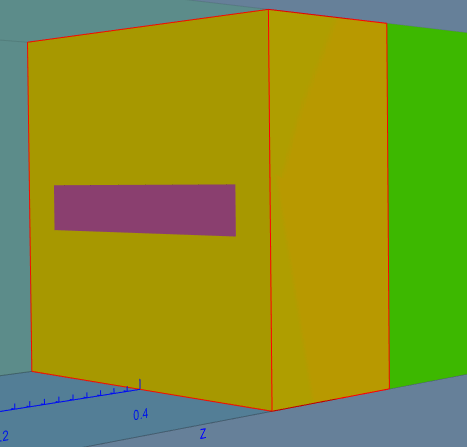 After simulation the wavelength dependence of the transmission is plotted for unit cells with difference aspect ratios, in figure 2. It is found that increasing the aspect ratio, making the rectangle thinner, pushes the secondary transmission peak to larger wavelengths. The peak moves from 0.75 microns to 1.2 microns when the shape is changed from a square to a shape given in figure 1.

The dependence on orientation angle was investigated as well. From figure 3 it is evident that orienting the rectangular cell of figure 1 with the vertical direction reduces the overall transmission. It is important to note the the input light is also polarized along this vertical direction.

Further experiments with rotating square-like air holes demonstrated that they lack this strong dependence on orientation, because of their symmetricity.

Simulating the Future of Networks with Optiwave

Optiwave Systems is an Ottawa based software company, boasting a robust variety of photonic design tools, which it provides to hundreds of leading high-technology institutions. Founded in 1994 and incorporated in 2005, the company has a well-established community of over one thousand users in over seventy countries. Optiwave has come to CENGN in order to validate…
More Info